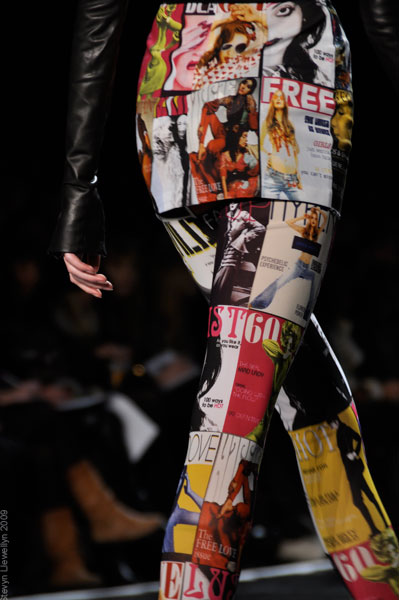 80’s influences and the Miss Sixty show gave birth to a fabulous love child. The spring show in September played into this collection as well, keeping the flower child aura. But this time the berets, much like the rest of the collection, were made of substantial beautiful leathers. The Fall collection amped up the attitude and the fun, like a rumble between Hillbillies and Hell’s Angels. Latter parts of the show gave way to patent puffer dresses and magazine cover prints reminiscent of 60’s pop art.

The show was full of pumping girl-rock music, celebrity status models (a.k.a. Karlie Kloss), messy waved hair, and kohl rimmed intense eyes. The look was feminine but tough, full of leather, hardware, and big bold prints. Obvious homage to the era was shown in acid washed tight jeans, something teen girls everywhere will be yanking up off the Miss Sixty racks. If the recent appearance of acid wash didn’t get your attention before, it just punched you in the face. Large print plaid and harem jeans made a debut together in a playful silhouette evocative of hunter garb, thankfully, sans mullet and shotgun.

The color, while starting off more muted and pattern oriented, grew into a more concentrated primary palette with bright fire engine red, purples, and stark white. Bold printwork reminiscent of early 60’s Lichtenstein art covered pants, dresses, and tops. Patterned and lace tights played in beautifully and modernized the looks, along with black footwear ranging from pumps to pirate boots. Miss Sixty celebrated rock and the extremes, long blousson sleeves to full peplum skirts on dresses. Most everything was “big” from silhouette to printwork, except for the second skin denim.

Even the fur was grungy, matted and black, it looked like someone had taken the arms off of a gorilla and sewn them into cropped jackets, boleros, and scarves that screamed bad-ass. The street-cred of Miss Sixty, however high up there, will definitely get bolstered up another notch after watching this energetic show. Even the models looked like they owned the world, and for a moment we were all in the effervescence of the 80’s and the stock market revival of the 60’s.