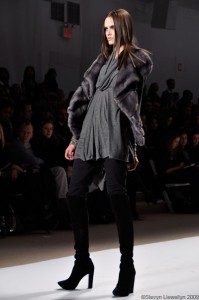 For Fall Yigal Azrouel offered an intriguing take on Romanticism, one that is decidedly dark and moody and yet true to the designer’s downtown sensibility. This modern take on romanticism embraces a strong edgy woman, the kind of woman who is certainly the mistress of her own destiny (and probably lives below 14th street). She defines her femininity not in conventional ruffles and flowers but in a dirtier more visceral take on those themes.
This season Azrouel attempted to marry takes on streamline structured pieces with softer draped looks. In the past the designer has showed an interest in tailoring and he has certainly received note for his way with draping. This season he offered a bit of both. There were dresses with strong sculptural elements, be it peplumed waists or sculpted shoulders. There were also soft draped moments in the way of diaphanous blouses and dresses. The key silhouette appeared to be a narrow leg with a voluminous top: narrow trousers were paired with blouson blouses, Fair Isle cardigans and roomy coats.
In the days of Monsieur Dior it was the designer who dictated la mode, nowadays it is a far more collaborative effort with designers bending an ear to the whims of their clientele. Azourel made no apologies for catering to desires of his wanton followers: offering her leather jackets with stud detailing, wearable trousers both lean and roomy and sensual dresses both draped and structured that were nothing short of the cool she demands. Take the putty colored draped mini dress or the lean, architectural dresses offered for day- all of which oozed an air of modern femininity. This was a well balanced collection that addresses all the dressing needs of the contemporary woman from day to evening. It is promising to see when a designer can hold two thoughts at once- in this collection Azourel toys with the tension between opposites- romantic interludes v.s. renegade barriers and more practically draping v.s. tailored structure.
The palette consisted of shadowy tones ranging from gray to purple with a few shots of vibrant color. Where the range in color was limited Azourel embraced textures. He showed ring spun knits with mink and pin-studded leather with tweed. The mix of elements and textures gave the collection a more luxurious feel. The clothes looked like they would feel good and take you just about anywhere.
What you have to love about Azrouel is that he is relatively young, certainly still in the beginning of his career. One can’t help wonder how far this designer will go as he continues to define his voice and builds a relationship with his audience.
– Alexander Coelho

See more photos from the event below

One thought on “Romance in the Shadows: A Downtown Take on Romance”