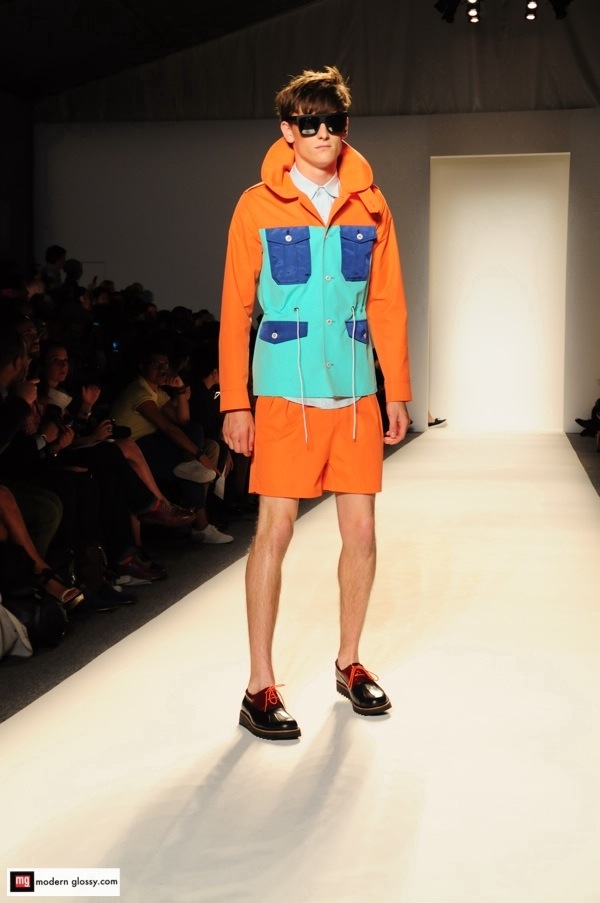 The devil in General Idea’s Spring/Summer 2012 collection is in the mood, not in the details. Themed les garcons de la plage – the boys of the beach – the show opened with a black and white video of children playing in the surf and sand. It almost felt a little nostalgic, as though it’s a video taken from a past family vacation, but upbeat enough to inspire that sense of relaxed anticipation when you know that stress is far away and that good times are on the horizon. The freshness of the vibe came from the use of a cool, oceanic turquoise combined with orange, nautical stripes, and upbeat patterns. Whimsical aspects like do-it-yourself- esque white patches sewn onto a leather jacket, knit shorts, and motorcycle jackets and blazers made in patterned knit fabrics breezed down the runway to the soundtrack of “Pumped Up Kicks” by California indie pop group Foster the People. (Contrary to its literal interpretation as a violent song, is a laid-back, airy number more likely about being in, trendy, and too cool for school). And that’s exactly what the boys of the beach are here – effortlessly chic, too cool for school. You imagine them whistling as they walk down not a runway, but the sand in St. Tropez in their shades, the waves lapping at their feet, both on the sunlit surf by day and on the moonlit beach by night.

The details – seemingly odd and busy combinations of patterns and prints on single garments – stripes, plaids, and checkers (oh my!), it is the big picture that creative director Bumsuk Choi is going for, and he does it well. By combining aspects of classic Americana (nautical stripes, cardigans, khakis, and a hint of nostalgia) with the jazzy charm of European decadence (carefully tailoring, white, orange, and turquoise shoes and loafers) the general idea here is leisurely in vibe, and luxurious in the lifestyle that it evokes. A modern day Dickie Greenleaf from The Talented Mr. Ripley would definitely wear this collection.

Even though it is after Labor Day as I write this and the glory days of summer are rapidly fading away, General Idea Spring/Summer 2012 lifts my spirits – it’s as though I know I’m about to kick back on the beach because summer is right around the corner again.
– Jessica J. Tsai 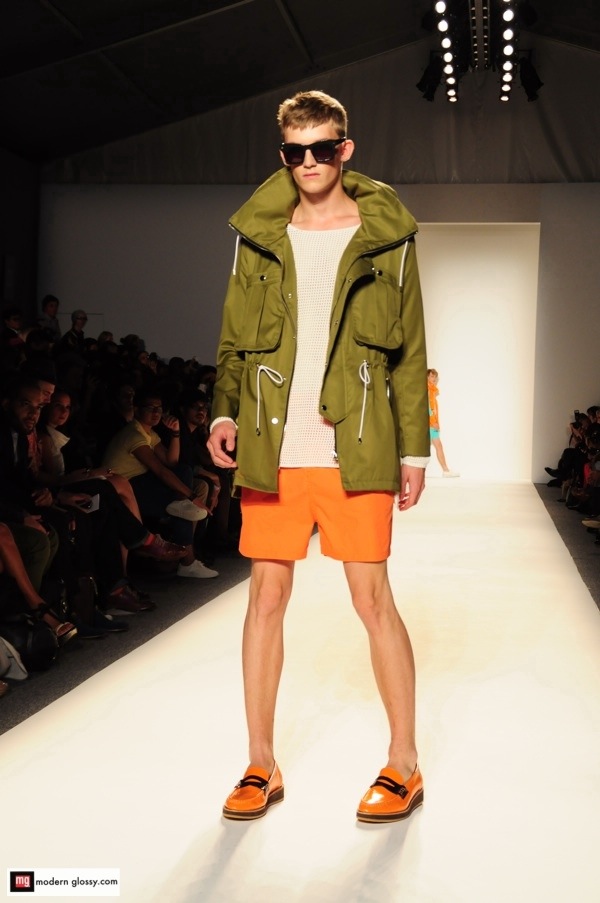