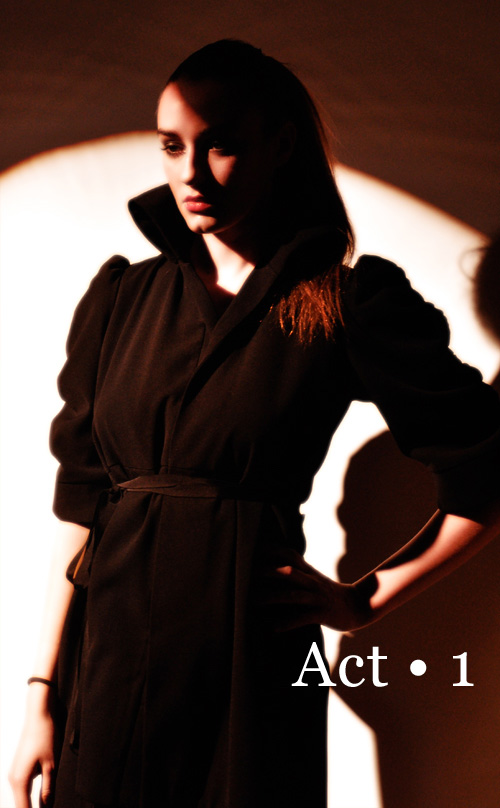 Wednesday night, I made my way into Chelsea to interview designer Sally Wu and her debut line Act 1. I was a bit late since I took the F train and had to physically run across town from 6th Ave to 10th and 11th. Those are long city blocks. And in heels, no less! I finally saw the familiar Highline (dark and sleepy due to winter days) and went through the glass doors to a quiet gallery. Immediately, I was hit by walls of bodies, girls in short chiffon dresses and dark eyeliner, men in bowties and glasses. I found my photographer and he pulled me backstage. Ok, we have 5 minutes. Models peered at me from behind another room, already dressed, their clothes rustling a bit, their hair sleek in the front and teased to a nebulous ponytail in the back. Sally stood still amidst the chaos, smiling and calm. We did our interview. Her collection, which was constructed in a record two weeks (my mouth dropped open at this and then seeing her collection, I was even more amazed) has the kind of sexy, effortless appeal that nyc girls aspire to. A cream colored ruffle silk blouse was a favorite, also the knit jackets with knotted bits of tulle and the wonderous wool boucle jacket with long nubs that fell down the front. I was especially taken by her knitted wool scarves in winter white colors that fit snugly around the necks of models. Her architectural influences are evident in her cocktail dresses, streamlined, but not severe and completely wearable. The mood was serene, the crowd watchful and silent. Whispers began to flutter around: ohh, wow, that’s great, do you like that? yes, that’s sensational. I turned around and it was a beautiful elderly woman with the brightest brown eyes and her husband in a smart red sweater and bow tie. I smiled. A litle asian girl stared at a model, her mouth open, her eyes wondering. Flashbulbs went off. And then I realized that simplicity and elegance is translatable at any age, in any language. — Jeanie Kwak
Photos by Stevyn Llewellyn
Visit Act • 1 online here 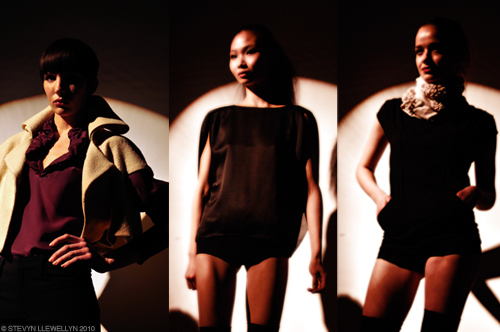 Watch the video interview below: