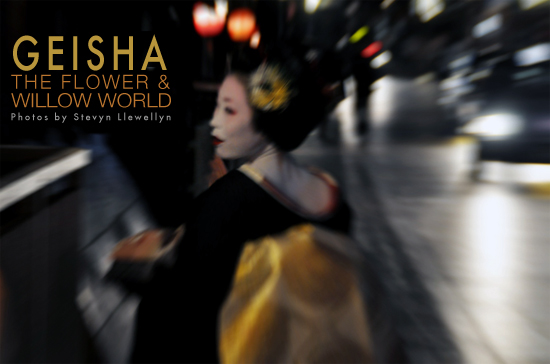 The enigmatic Geisha is something from another time. A striking contrast to modern day Kyoto, Their colorful silhouettes can be seen walking down the streets of Hanamikoji or Pontocho dori. The Geisha (hereafter called Geiko) and Maiko  are a phenomenon exclusive only to Japan. This idealized beauty, unchanged for several hundred years is the testament to a culture whose aesthetic tastes have preserved these unique clans.

Maiko begin their careers training and living in a lodging house called an Okiya. Maiko are the Geiko in training. They are subjected to a challenging regimen of rehearsals and classes which involve dance, calligraphy, flower arrangement, and playing instruments such as the  Koto and Shamisen. They regulary perform at exclusive banquets in tea houses, called Ochaya. Maiko and Geiko also perform annually at performance events, some of them at the famous Kaburenjo theatre in Gion, Kyoto. They may attend as many as three or four parties a night, which entails quite a bit of running (or cabbing) about. Geiko are artists in every sense of the word. Actors, painters, dancers, calligraphers, and singers are all attributes of this extraordinary woman.

The female society of the Gion Kobo is organized by status. The owners are called Mothers or Aunts while the Maiko and Geiko is given a senior sponsor called an Onesan, meaning Older Sister. The  Onesan acts as a role model and mentor to the younger one, and guides them in their training. The proprietress of the Okiya supports the Maiko on their way to become professional. They live there for five to seven years, a contracted period of time where she repays the house for their investment in her. Once they become Geiko, they become independent, although the Okiya still collects a small percentage of the Geiko’s earnings, as they continue to work as their managers and agents.

Gion Kobu was formally an entertainment district near the Imperial Palace located on Imadegawa street. It was known as The Flower and Willow World. In the late 16th century, Hideyoshi Toyotomi, a powerful general unified the country and moved this area. Eventually a new section of town arose in Gion, near the Yasaka Shrine. In the 17th century, Taverns known as Mizukakejaya became the teahouses of today. These modern teahouses are all exclusive to members, who are primarily  all Japanese. Wealthy business people may pay several thousand dollars to be entertained by a Geiko.

The Geiko in full costume approximates very closely the Japanese ideal of feminine beauty, reminiscent of a Heian princess with black hair and white skin.

The Geiko  kimonos are a testament to the wealth of the patrons. They are the costumes of the profession, some are even considered sacred. They are made from some of the finest and most expensive textiles in the world. Each kimono is a one of a kind work of art and it’s owner has a direct influence on it’s design.

The canons of traditional Japanese taste divide the year into 28 seasons, each having it’s own symbol. Colors and patterns reflect the exact season and are worn accordingly. For example, Crystanthemums are used for early November, or Nightingales in late March.

Called a Hikizuri, the Geiko Kimono is distinguished by it’s long sleeves and wide train, worn low on the back of the neck to accentuates its length. This can weigh up to 44 pounds. The undergarments are two rectangles of bleached white cotton. One worn around the hips, and the other around the chest. Over this is worn a hadajuban, a loose blouse that follows the line of the kimono. The nagajuban is the full length under robe that follows the kimono’s lines. The distinctive collar is known as the Eri, which is the red Maiko collar that is hand sewn into the nagajuban for each wearing. These are made of silk and embroidery. The interesting aspect is as one ages, the applique on the eri becomes heavier until very little of the original red is shown. The red symbolizes childhood. The progression continues until she “turns one’s collar” from Maiko to Geiko. From then on, the Geiko wear only a white eri, made from silk or crepe.

The hem of the hikizuri train is weighted and fans out in an arc. The hikizuri is secured with a long obi, which measures over twenty feet. This is tied in back with both ends dangling down. An obi can be made from such materials as damask and can cost thousands of dollars to produce. The obi clasp is another one of a kind ornament which secures the fabric.
They wear sandals which are six inches high called Okobo. This height is to counterbalance the the long ends of the obi. Socks are worn one size smaller to accentuate the dainty appearance of the feet. The Geiko have their own dressers, mostly men, who train for years to master their profession. It is crucial to have a dresser ensure perfection.

The Geiko can sometimes be seen carrying a traditional handbag called a Kago, made from woven silk. These would hold a boxwood comb, a dancing fan, hand towel and other accessories. The dancing fan is slightly larger than the ordinary one, with bamboo spines measuring about twelve inches long. This is called Maiohgi in Japanese.

The first style of hair a Maiko wears is called the Wareshinobu style. Suggestive of a shell, it is sculpted and secured by red silk bands known as Kanoko, and decorated with Kanzashi, stick pin ornaments that distinguish the Karyukai look. Additional ornaments are Hairpins tipped with silk plum blossoms, (representing the month of February) adorn the sides and back of the bun. Silver flutters called Bira are pinned to the sides and front of the hair. The orange blossom pin called Tachibana is on the top. Also added to the hair is a long pin tipped with balls of red coral and Jade. The Maiko’s hairstyle is their own, while the Geiko wear a wig.

The stark white Maiko make up was originally worn by male aristocrats when they had an audience with the Emperor, considered a sacred prescence. The audience of would be seperated from the Emperor through a thin scrim of fabric. The candlelit chamber allowed the Emperor to identify them. The Geiko used to use zinc-based make up, but no longer. They apply binsuke, an oil paste foundation then white powder, then pink on the cheeks and eyebrows, and finally a spot of red on the upper and lower lip. Apprentice Maiko can be distinguished by only having their lower lip painted. On the neck, three lines reveal that the wearer is dressed in formal kimono, and two lines when wearing ordinary costume.

Geiko and Maiko Dance
The many dances they perform in fixed patterns called kata require slow, controlled movements that require trained muscles and years of training. The Maiko learn dance through a process of learning through imitation, known as minarai.  The main performer is known as the Tachikata, and the Jikata is the accompanying musician, who plays the shamisen and sings.

While modern, the Geisha today follow old traditions that are still enveloped in mystery and beauty. If  you are in Gion, you may catch a glimpse of one in a cab, or walking quickly to a tea house on Hanamikoji dori. The Flower and Willow World of yesterday is seemingly unchanged from hundreds of years ago.

Watch the video below of the Maiko dance performed in Kyoto filmed by Stevyn Llewellyn.

– Stevyn Llewellyn
Research for this article came primarily from the book, Geisha: A life by Mineko Iwasaki.

3 thoughts on “Geisha – The Flower and Willow World”