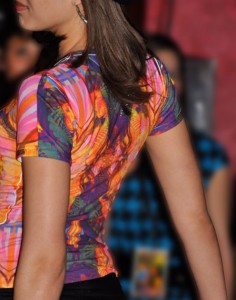 Home in Chelsea hosted the Noah G POPography fashion show last chilly Thursday night. A (short) red carpet was laid outside for the invitees. Artists, friends and family, and even NYC’s own Naked Cowboy made a fur coated, semi-naked appearance for the cameras. Outside the club guests mingled with a cleavage baring interviewer in front of a Hollywood premiere styled Noah G POP Banner. Female guests were clad in barely there mini dresses, opaque tights and fur coats, a staple of New York winter fashion. One stylish attendant wore a pair of gorgeous black satin pumps accented with gold trim. Fashion fans to seniors outfitted with oxygen tubes filled up the line to get into Home, a sight probably not so often seen there at this 27th street lounge. Noah G POP started off his event with an hour long open vodka bar and the DJ spinning top 40’s hip hop, as everyone made their way with Vodka mixers to the dance floor. Curiously, an air traffic controller waving light-sticks directed the crowd off the dance floor as “Womanizer” pounded its way through the speakers.

The models came out from behind the DJ booth sporting sublimation and inkjet printed silk jersey and cotton tees over dresses and dark pants, clearly showing that the focus of the design work was in the art depicted onto the apparel. The cut was slim and fitted much like a baby tee, and not very inspiring in the way of construction technique. Noah G Pop’s talent was conveyed mainly in his artwork on the far left wall, his signature Pop art style with a graphic design twist. The use of “tattoo inspired” print heavy on the glitz and rhinestones invoked one of Noah’s primary designer influences, Ed Hardy’s Christian Audigier, whom Noah jokingly confided in Modern Glossy of his plan to overtake. His Men’s line was smaller and simpler, black blazers with glimmering crystal and metal appliqués. Though a bit yawn-worthy in the name of couture fashion, the music and venue seemed appropriately distracting so that one couldn’t complain too much about the show’s lack of length and awkward segue into full-on dancing of everyone near the floor. Nevertheless, the interesting, shocking (did I mention the Naked Cowboy?), and artsy crowd made up for the fact that Noah G’ show slightly disappointed, and the vodka tonics didn’t hurt much either.

But one can’t blame Noah for trying out his creativity in other outlets, as artistic people tend to be good in other mediums. However, we’ll give him good credit since the line between Fine Artist and Fashion Designer is a hard one to straddle successfully. Bonus points also should be awarded since this event was hosted to benefit underprivileged children via the Rush Philanthropic Arts Foundation.
-R Em
photos by Stevyn Llewellyn
see more photos from the event below