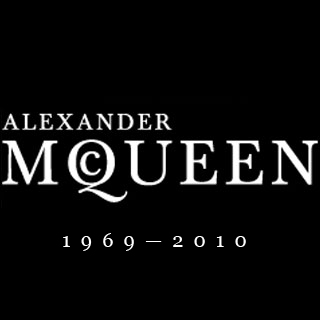 The fashion world lost a creative genius during these last few whirlwind hours. Lee Alexander McQueen, London born, worldwide known, suffered from death in the form of taking his own life. Not much is known at this point of how or exactly when, rightfully so, as the media is respectfully asked to refrain from intruding on McQueen’s family and friends’ mourning process. But what we do know of the former designer of the House of Givenchy, is that an amazing talent and mighty force in the world of fashion was taken from us in a devastating way. Many can speculate why McQueen chose to take his own life, as his own mother, [with whom (from sources) he had an extremely close bond]  died recently.

All of us at Modern Glossy, are incredibly saddened at the news, and we’re honored to have shared and to have experienced a world  with someone so visionary and larger than life. Mere days away from his McQ showing at Milk Studios, Lee Alexander McQueen is gone from our lives, no longer creating, no longer able to inspire others with his future creations. It is a dark day in the fashion world, and many of us are left asking why.

But, why, is the wrong question to ask. The right question is how.How can we remember Alexander McQueen.

We can remember him as a man with incredible passion and drive, incredible talent, and one of the greatest modern day fashion designers of our lifetimes. Lee Alexander McQueen, you will be truly and sorely missed