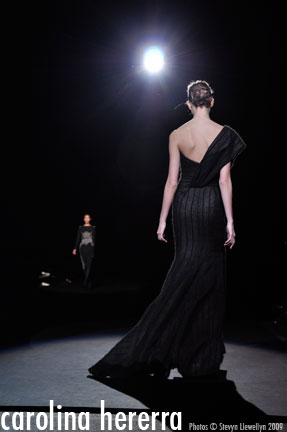 Carolina Herrera-‘The show must go on’ could easily have served as an epigraph for Mrs. Herrera’s Fall collection. The maven of glamour delivered a noteworthy collection of spectacular evening dresses, desirable cocktail dresses and enviable day looks. For Fall Herrera gave way to a new awakening of Victorian chic. It seems imperative to set the stage for this collection, and why it resonated so strongly. Dimly lit throughout the models seemed to stream from a single portal of light and then returned into that light. I couldn’t help but consider the poetic implications of the lighting- it seemed to speak to an awakening of sorts- or an enlightenment.  Could it be that Herrera was suggesting that in these dire times we have been offered an opportunity to tap into a greater awareness? One couldn’t be totally sure but it does seem interesting that the collection was partly inspired by an era well notated for its social awakening.  Context aside this collection did speak to the great hallmark of the Herrera aesthetic: understated womanly distinction.

With a graceful genuflect to the era of feminine awakening, Herrera gestured to a new kind of romantic glamour. In a time where showing more is often favored, Herrera suggested a new kind of sensuality- one that incites the imagination. Instead of lots of skin the designer sent out form fitting sheaths with sleeves that emoted sensuality instead tawdry vulgarity. The absence of skin made it that much more intriguing when it did appear through slit of an bell shaped sleeve or a flash of decollate between the matching bolero cover up thrown over a sweetheart cocktail dress. Coincidentally (or perhaps not) Ms. Herrera was recently written up by Vogue’s Plum Sykes for ability to make covered arms covetable. The designer’s signature white blouse was transmuted and rendered in metallic gazar paired with one the collection key items- the high waisted skirt.  Herrera has not looked so herself in seasons. The collection had a very clear, fanciful yet relatable sensibility that was slightly lacking in recent collections. Herrera played to her legendary strengths showing a bevy of gowns one more intriguing than the next. One particular stand out that spoke most clearly to the mood of the season was a green gown with corset and bell sleeved bolero- positively enviable. This collection was overrun with  all the great Herrera clothing I remember revering- this season ampt up- the sharp cut was still there but this season the clothes looked edgier more cool (for the Mrs. Herreras and Herrera Juniors of the world a like). This collection is what I hoped designers would do: a clear succinct slice of a label’s sensibility.

One welcome continuation from prior seasons was a continued exploration of textiles. Herrera has any eye for great fabrics. Before the designer was urged to design a ready to wear line she considered designing fabrics. This season she turned to gilded gazars, velvets and metallic tweeds to add a luxurious depth to the clothing. The palette was comprised of sumptuous autumnal tones grounded by black. Bronze, purples, and deep emeralds hues played to the darker sensibility of the season.

The show will certainly go on… and things will improve. I can’t help but consider that in these tumultuous times that we all could stand to take a little time to do some introspection- and re-awaken a greater appreciation for life and all it has to offer.  In the meantime perhaps we would all be wise to take a page from Mrs. Herrera’s book and face these dire times with style.