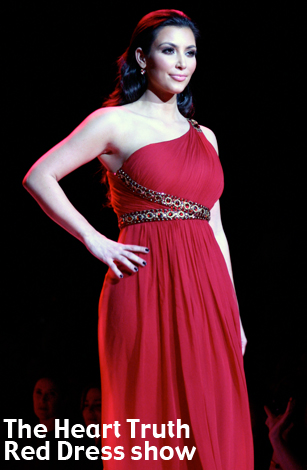 Nothing brings out the crowd to fashion shows like celebrities. And when the clothes are actually modeled by them, the crowd intensifies. The Heart Truth’s Red Dress Show manages to combine fashion and stars in raising awareness for heart disease, the number one killer of women in the United States.

The air inside the main tent at Bryant Park was electric with anticipation as the audience eagerly awaited the seventeen celebrity models. Usually in most runway shows, a certain look or piece will draw gasps of awe and applause, but not this show. As soon as the celebrity’s name was flashed against the red curtain, the cheers erupted. And when the star stepped out onto the red velvet runway, the crowd went wild. Whistles and enthusiastic applause, along with a few standing ovations went on through the show as celebrities like Kristin Chenoweth, Raven-Symone, Felicity Huffman, Valerie Harper (of Mary Tyler Moore fame), and Estelle strutted their stuff on the runway. Swimmer Dara Torres walked barefoot, holding her strappy silver heels, much to the pleasure of the audience.

The designers of the seventeen red dresses left a lasting impression as well. From Badgley Mischka to Tracy Reese, each provided their own unique flair and style to the beautiful vibrant dresses, accentuating the personality of the celebrity. Jordin Sparks was exuberant and youthful in Badgley Mischka, Kim Kardashian was regal royalty in Marchesa, and Kimora Lee wore a powerful fiery number from her own Kouture by Kimora line. Crowd favorites were Joan Collins in elegant Stephane Rolland and Heidi Klum in statuesque John Galliano.

As bright crimson confetti fluttered onto the runway, the celebrity models danced and hugged each other at the end of the show. What a great way to start Mercedes-Benz Fashion Week Fall 2010!
—Review and Photos by Nari Kim
[svgallery name=”red_dress_fall2010″]