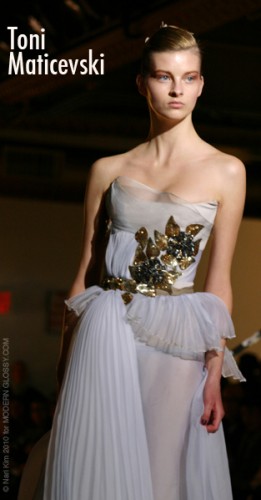 Romance was in the air at the Toni Maticevski Fall /Winter 2010 show.  Long romantic flowing pale skirts with sequins and gold leaves floated down the runway on fairy like creatures. It was Soft Sophisticated Feminine Elegance… It made you want to fall in Love. Black fitted long evening gowns covered in mounds of detail and lace were soon to follow…  It made you want to have an Affair. This Aussie certainly knows how to dress the lady for the party and making the party all about the lady.  A sequined black bra reminiscent of Madonna’s early 1990’s World Tour kept popping into play…we will see if it works this decade for the fall.
— Fauncine Crane
Photos by Nari Kim
[svgallery name=”toni_maticevski_fall2010″]

Toni Maticevski’s show was held off site at the Roger Williams Hotel on Sunday, September 7, 2008. Maticevski is a young Australian designer showing for the fourth time at New York fashion week. His Spring 2009 collection was inspired by both the book “Inventive Paris Clothes 1909-1939” and by the fashion of this period. His inspiration was immediately evident in several of his 1920s inspired dresses. These short dresses were hemmed with silk fringe that swung as the models walked and were reminiscent of a flapper girl’s costume.

Maticevski choose to work mostly in silk and lace, often embellished by flower appliqué or long coiled shoulder details. His draping and pleating was beautifully accomplished and at times origami-esque. A few pieces were extremely sheer, but the silhouettes of these dresses and even the boudoir feel added to the overall nostalgic mood of the presentation. The collection was exquisitely tailored and wearable yet full of interesting detail to distinguish it.
-Lyndsay Skeegan