Toni Maticevski’s show was held off site at the Roger Williams Hotel on Sunday, September 7, 2008. Maticevski is a young Australian designer showing for the fourth time at New York fashion week. His Spring 2009 collection was inspired by both the book “Inventive Paris Clothes 1909-1939” and by the fashion of this period. His inspiration was immediately evident in several of his 1920s inspired dresses. These short dresses were hemmed with silk fringe that swung as the models walked and were reminiscent of a flapper girl’s costume.

Maticevski choose to work mostly in silk and lace, often embellished by flower appliqué or long coiled shoulder details. His draping and pleating was beautifully accomplished and at times origami-esque. A few pieces were extremely sheer, but the silhouettes of these dresses and even the boudoir feel added to the overall nostalgic mood of the presentation. The collection was exquisitely tailored and wearable yet full of interesting detail to distinguish it.
-Lyndsay Skeegan

Sergio Davila has been producing menswear for some time, but this was his debut runway show under the tents at New York Fashion Week. His elegantly tailored suiting was often edged with athletic stripes or other quirky detail that lent a unique air to his pieces. Some suits were accented with slightly feminine detail such as mandarin collars or loose knitting that provided glimpses of skin. 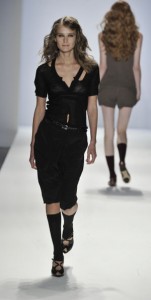 The women’s wear was sporty and sexy with sheer crocheting and keyhole detailing. The entire collection appeared casual and comfortable yet extremely well tailored- all in all an exceedingly successfully runway debut.

Always beautiful and feminine, Monique Lhuillier’s spring presentation did not disappoint. Softly sculpted gowns in colors inspired by a vacation in a tropical beach local flowed down the runway. The aptly named colors (azure, sand, summer, pacific blue) and back-to-nature prints such as wave and wheat stalk further exemplified the inspiration.
A silk tulle asymmetrically draped gown in a blue that Lhuiller dubbed “lagoon” appeared to stream along the runway exemplifying the water it was chosen to represent. Beading and tulle overlays further conveyed movement in a collection that was as relaxing and refreshing as a day at the beach.

Betsey Johnson has been a main stay in the retail and fashion world for over 40 years. Her whimsical, flirty, punk rock designs stand as a reminder to the fashion world that fashion can be fun. Betsey is now a proud grandmother for the second time and the new addition to her family obviously influenced her Spring Collection. The extremely theatrical show had three distinct groupings starting with floral maxi dresses and jumpers that if produced in miniature would be appropriate for a toddler. The somewhat silly frocks were worn by models with wigs of purple, pink and white cut blunt and short. Some girls even sucked on lollipops as they strutted down the runway to apropos songs such as “Be my Baby,” “Candy Girl,” and “Mr. Sandman.”
For the second act an actor clad as a pirate made mischief on the runway to the song “Wild Thing.” This was soon followed by mini dresses over striped or skeleton printed leggings, hot pants and bathing suits all influenced by the pirate theme. Next came signature Betsey pieces- floral prints in bright neon colors such as green, pink and blue. Good girls gone bad rounded out the theatrical show: models in white sheer petticoat dresses, hands cuffed behind their backs. Betsey took her customary cartwheel down the runway in a Peter Pan inspired green sequined dress and attendants left the show in high spirits.
– Lyndsay Skeegan

CHADO- He is back and in fighting form- on Friday night Ralph Rucci closed New York Fashion Week with all the fanfare and warm embrace of the returned prodigal son. Rucci is a prodigious talent and while he is often lost in the minutiae of the New York fashion set, his work stands as a testament to his great talent. As the world of haute couture skirts dangerously close to oblivion it is important that we uphold one of our most brilliant haute courtiers.

I must admit that I am partially biased; I have long been a Rucci enthusiast. For Spring ’09 Rucci sent out a strong line up of clothing suitable for every occasion- from smart day wear to gripping evening gowns. The couturier crystallized those hallmark Ruccisms and move them into a more approachable direction. He showed continued mastery over the art of construction.

Chado is a meditation on form, line and structure. Each season many designers attempt to redesign the wheel, but Rucci instead continues an exploration of his signature shapes enlisting new applications and techniques. Bold shoulders seemed particularly new for the designer who is known for a more gentle approach towards the shoulder and décolleté. He used various types of artistic fringe to great affect, inciting riotous applause as models turned on the runway to reveal the insets of fringe. Illusion with geometric cut outs were a strong motif in this season’s line up. The cutouts appeared on a tulle coat over an A-line dress and on a black sheer top paired with slouchy black satin trousers. Other moments of decadent indulgence included the gowns with Rothko inspired paielletes or the slinky floor length sequins skirt with sheer top and matching jacket.

Spring 09 marked a departure for Rucci who seemed to be courting a younger generation of fashion intellectuals. Though at moments the collection showed the wavering uncertainty of a babe horse gaining her sea legs, Rucci has the talent to address a younger audience and his Spring collection suggests the beginning this new courtship. The collection was proliferated with a plethora of coquettish dresses that remain true to the spirit of Chado. Rucci was careful to remain mindful of his faithful followers offering intriguing pant suits with jackets of rounded shoulders with detailing on tulle or crepe. This collection was an exercise in restrains and what I expect will be the blossoming of a new point of view at the house of Chado.