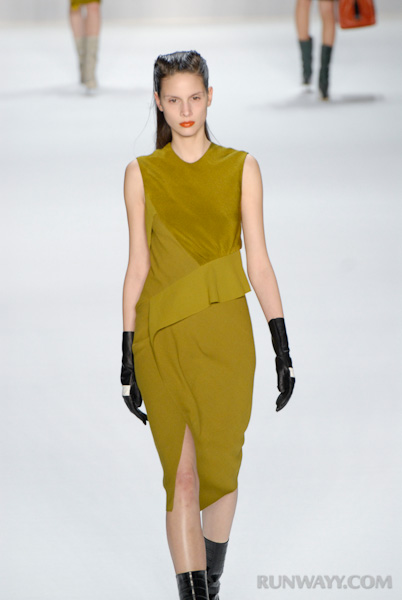 Narciso Rodriguez Fall 2012 collection at Mercedes-Benz New York Fashion week. See images from the collection in the slideshow below. Photos provided by runwayy.com 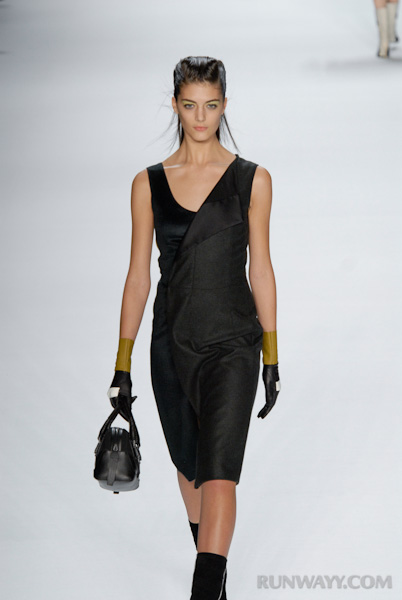 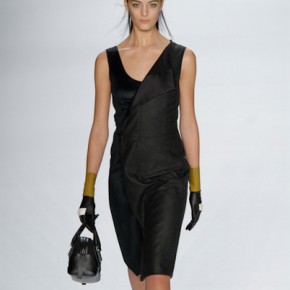 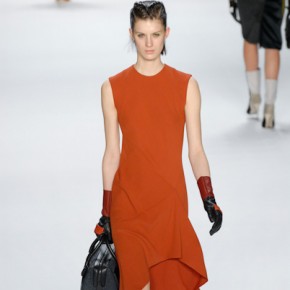 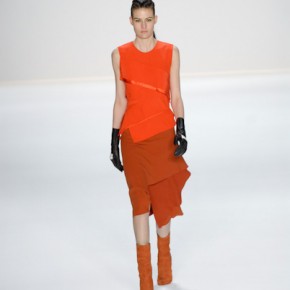 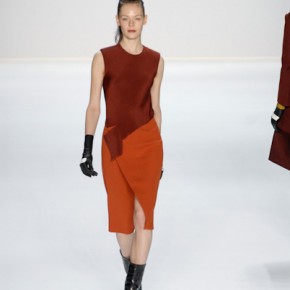 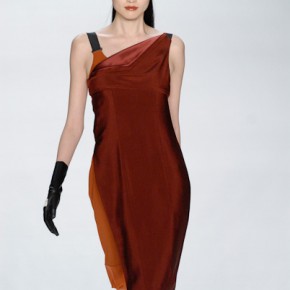 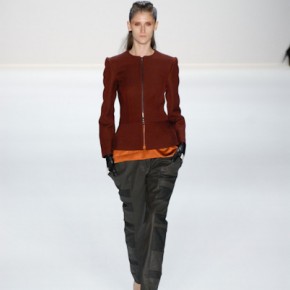 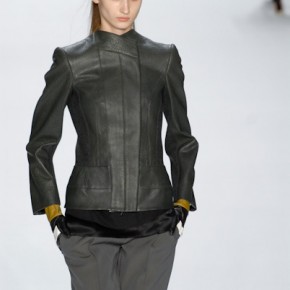 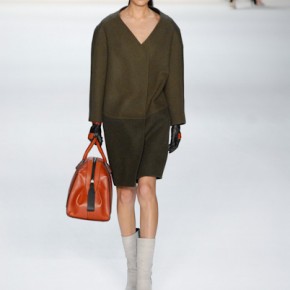 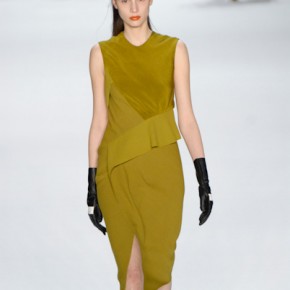 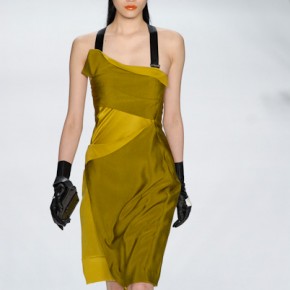 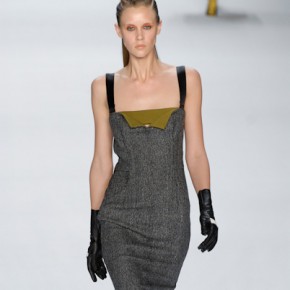 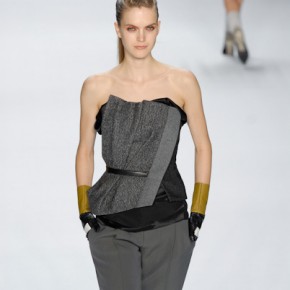 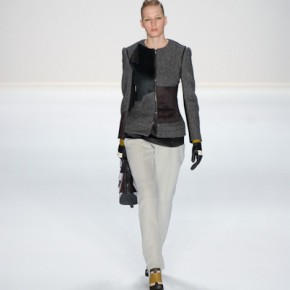 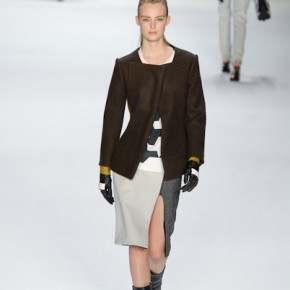 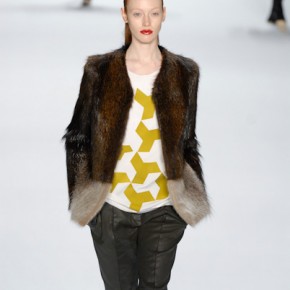 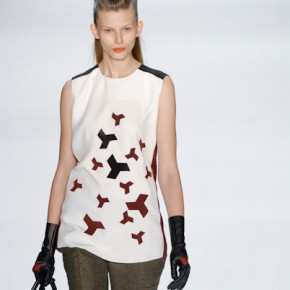 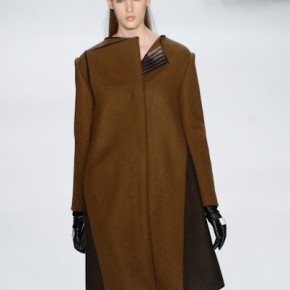 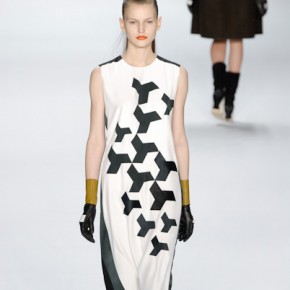 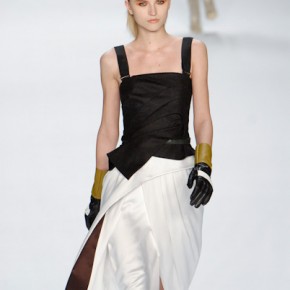 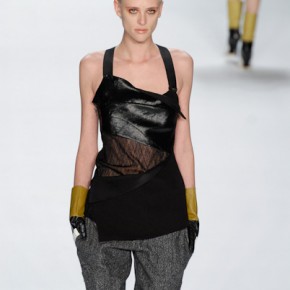 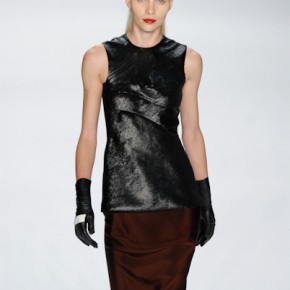 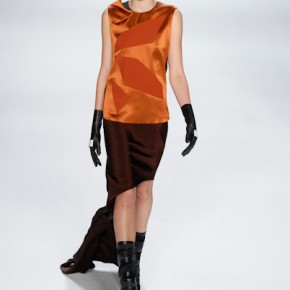 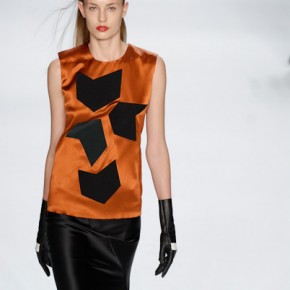 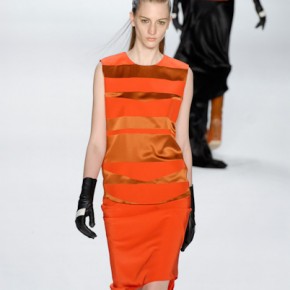 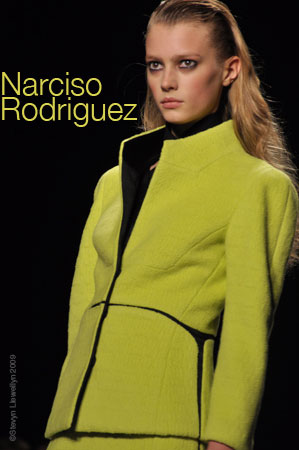 After showing for several years in Chelsea, Narciso Rodriguez found himself back in the tents of Bryant Park for Fall 2009. However, nine o’clock is a difficult time slot for any designer to present a collection.  By then, show-goers have done the “hurry up and wait” routine over and over, we’ve dealt with stress and crowds all day and are simply worn out.  As for me, I was happy that Mr. Rodriguez opted for the tent this time and I didn’t have to hike over to The West Side Highway (well, almost), rather, I just had to go a few steps over from the Salon where Domenico Vacca had just ended.  The tent was overcrowded, of course, and people were highly irritable.  As a long time admirer of the humble designer, I tried to relax and wait patiently for the show to begin.  Claire Danes and Julianna Margulies were sitting upfront (just as last season) along with Jessica Seinfeld.  Kanye West (most likely influenced by his new model girlfriend, Amber Rose) was there as was Fern Mallis, Linda Fargo and Simon Doonan.  NY1’s society reporter George Whipple was also in attendance (my mind is still boggled that he covers fashion).

The first seven or eight pieces appearing on the runway were in khaki, black and white — very typical of Rodriguez’s sophisticated range.  Usually, he infuses his neutral palettes with at least one pop color, but this time he chose several.  His color selections were brighter and cleaner for Fall ’09 — so much so, they were given names such as; highlighter pink, highlighter yellow, ultra purple and citrine.  Rodriguez seemed to draw inspiration from 80’s legend Steven Sprouse.  Fashion, as we are all aware, is cyclical and the Day-Glo colors were refreshing and looked current.

Unlike the colors, I didn’t find the styling to be new looking or particularly modern.  Apart from the lace-layered, printed camouflage and the onyx, matte lurex/wool tweed, the only other standout was the oversized thimble (or gumdrop) shaped hats with cut-outs for the eyes.   The overall silhouette was narrow and sexy and very much what love about and have come to expect from Mr. Rodriguez’s clothes.  But, I felt that this season’s cleavage-focused, skin-tight, viscose knit dresses were only suitable for Pamela Anderson.  They also contrasted drastically from the other pieces in the collection (which were much safer in terms of revealing the body).  On the opposite end of the spectrum, Rodriguez showed an oversized rain jacket in black and white camouflage print paired with matching (full, boot-covering) leggings.  Camouflaged she was not, as the model looked like a cow grazing through a pasture.  If a pencil-thin model can’t pull this off, I thought, who can?

I did find some “winners” within the thirty-nine looks Narciso presented.  The highlighter yellow wool jacket and dress were perfectly sculpted and the bright silk crepe dresses embroidered on top with shimmery black made a bold statement.  Overall, this wasn’t Narciso Rodriguez’s best season.  He has been so good for so long, the fashion world’s expectation of this designer is probably beyond what anybody can possibly deliver.  It certainly wasn’t a bad collection, but it just wasn’t as good as I’d hoped.  In Narciso’s case, there is always next time!