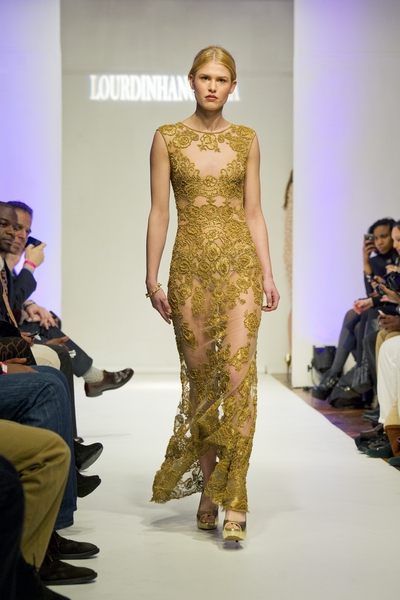 Lourdinha Noyama Fall 2012 Debut at iFashion week in New York. From the press release: Essentially revolving around evening wear, wedding gowns, and contemporary wear, garments aren’t simply pieces of clothing when witnessing Lourdinha Noyama’s collection, but accessories within themselves. Supplement jewelry to her clothing is evidently unnecessary, as each garment is enough to display on a woman’s body on it’s own. Noyama’s collection the audience with a fabulously sandy discovery. From brown and beige patterned and chiffon dresses to white delicate and laced wedding gowns, each piece, it seemed, came with its own historical background and story. Showcasing a substance of new quality this season, Noyama revealed her collection in all gold.
See images from the collection in the slideshow below. 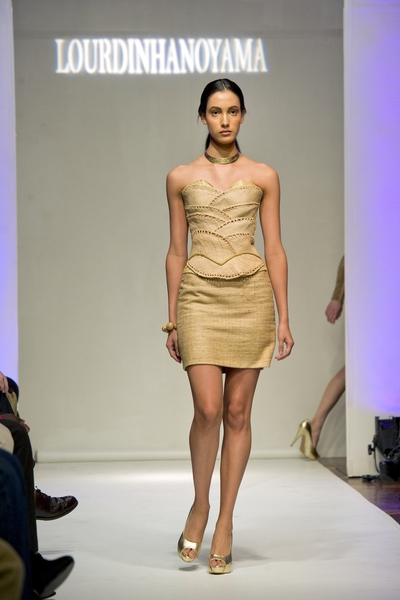 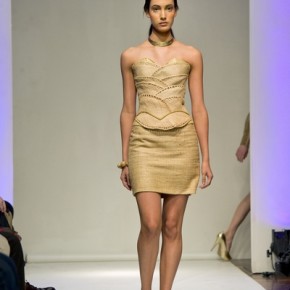 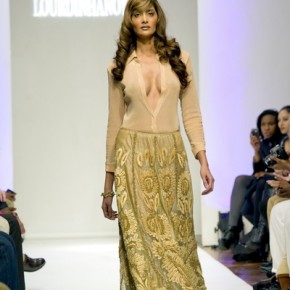 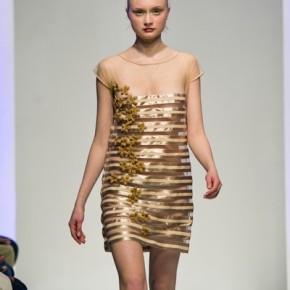 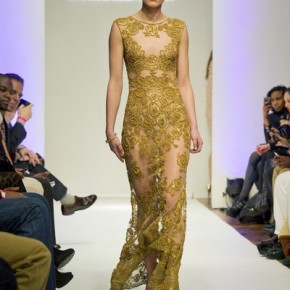 Sao Paulo Fashion Week in Brazil, a spring board for various young designers to enter into the fashion scene, featured Lourdinha Noyama as one of Brazil’s most innovative emerging designers, where she showcased her collection. Noyama was also a featured designer in CasaModa Novias, the first ever event in Brazil that focused exclusively on fashion design for brides and grooms. These presentations were warmly credited by the international press and covered by Collezione, Financial Times, and a London based web site named WGSN. She has also been featured in Brazilian magazines Anuario Noivas, Magequim Noiva, and many more.

Lourdinha Noyama’s desire is to present high-fashion that is genuinely and uniquely Brazilian. Her work utilizes traditional raw-materials that is typical of the local handy-work of artisans. The end result is a distinctive embellishment of classic shapes and styles. Continuous and detailed research is performed of the more traditional artisan communities, extrapolating their humble origins to a more complex and refined presentation. Noyama is to elevate an intrinsically Brazilian product to the luxury world stage 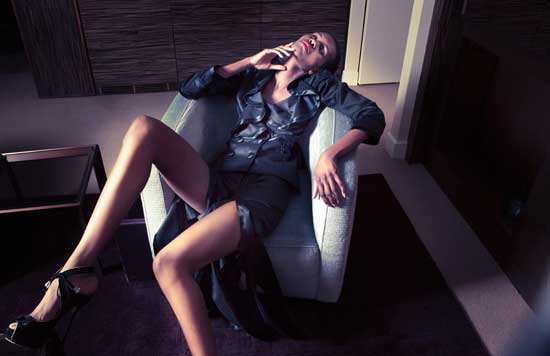 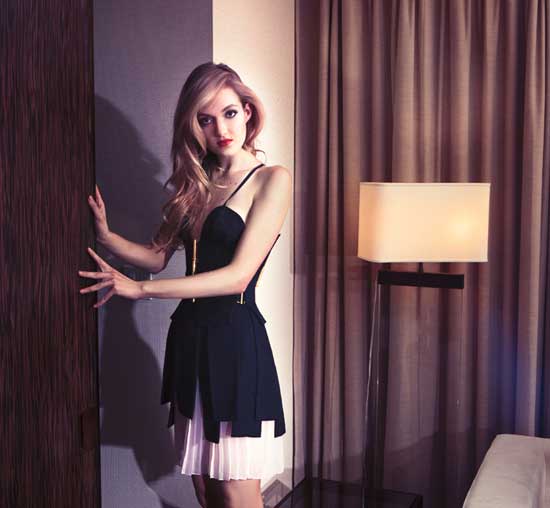 From The Press release:  Ghassan Yazbeck is set to be showcasing his clothing for the first time during this upcoming Fall 2012 New York Fashion Week in part with iFashion Network’s sponsored emerging designer showcase. Yazbeck is a New York based designer who is producing all his garments, from conception to completion, in the garment district. Buyers and press, models, and fashion professionals will attend Yazbeck’s official runway show. With the release of his new bold collection, Ghassan Yazbeck is to take women’s fashion to new heights with his one of a kind design. The Ghassan Yazbeck collection offers a cutting edge, while still grasping a very feminine quality. After trying his hands at various careers, Yazbeck finds himself at home in the world of fashion design.

Yazbeck’s clothing offers a structured, sexy, and elegant look for young independent women. Combining colors like blacks, whites, and reds with teal and purple accents, Yazbeck makes sure women who put on his clothing will feel playful while looking sophisticated. The detailed cuts on his clothing suggest maturity, as a wide selection of his dresses and jackets include a popped-up collar, matrix-style. Certain cut-outs catch you off guard as they fit to outline the woman’s body at an intimidating degree. Using fabrics like silk, double knit wool, and wool crepe, Yazbeck not only showcases a great look, but promising quality. Please see below for inclusive editorial images and invitation for fashion week.

“One cannot stop their eyes from seeing beauty, for beauty commends the eye,” expresses Yazbeck. “I am excited about my first official contribution to the fashion world.” As a graduate from McGill University with a chemical engineering degree, he later changed direction to the pharmaceutical industry. Yazbeck, however, openly expresses that his interest in science was directed by the hands of his parents more than his own. He then enrolled in Parsons, leaving behind his former and comfortable life. He graduated with a degree in fashion design and is now on his way to fulfilling his lifelong dream of creating a lifestyle brand.

Along with the accelerating week of fashion, iFashion Week will be simultaneously spotlighting emerging and upcoming designers such as Ghassan Yazbeck.