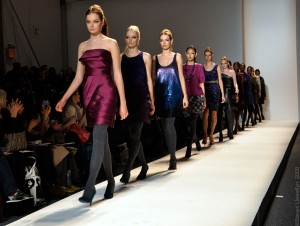 Lela Rose’s layering technique mimics that of an “insect’s exoskeleton”, a very intriguing effect seen in the thick armor of the beetle-back trenchcoat, in vivid hues of the dragonfly-esque printed separates, and even in the twisted cream silk of the ethereal cocoon gown. Asymmetrical shoulder detailing added immensely to the aura of “magical creatures” flitting to and fro, weaving through vines and traffic lights.

Additionally, this season Lela Rose has partnered with Payless Shoes to create a line of satin dyeable shoes. A number of styles are available in stores, including round-toe pumps and ankle booties. “Unforgettable Moments” was launched to make finding the perfect pair of shoes, for any special occasion, simple and affordable.