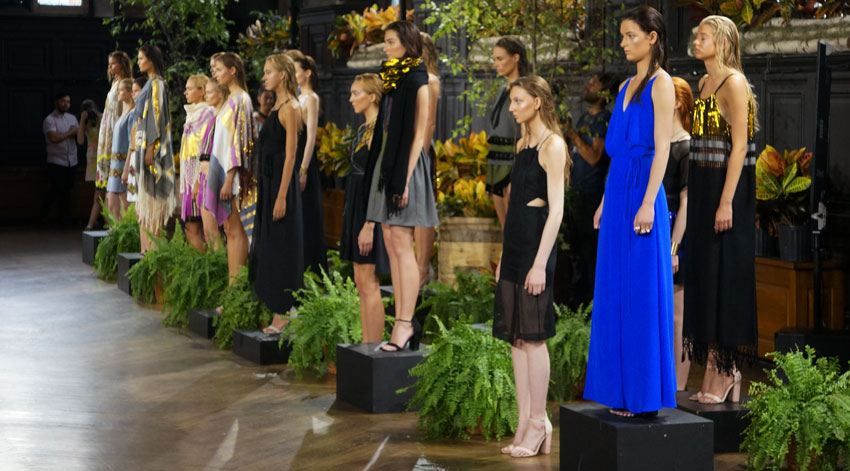 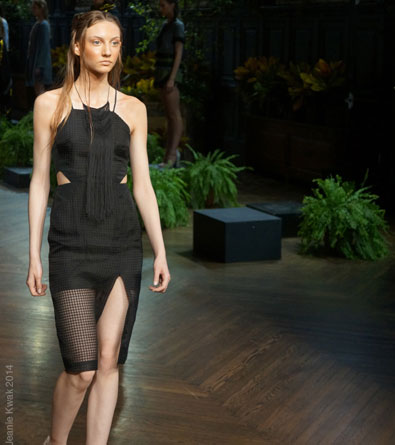 If it’s one thing that can bring an entire city to it’s knees, it’s NYC humidity. If you’ve experienced this tropical cloud pass, you know what I’m talking about. We arrived at the Highline Hotel yesterday in the midst of this heat and found it’s green courtyards to be a gentle reprieve from the dense exhaust of city air. We were here for Harare’s SS15 collection, set in the 19th century halls of this former Theological Seminary. It began to rain and the courtyard emptied and guests  were ushered upstairs to the second floor.  We entered a domed hall with stained glass, golden chandeliers and verdant flora. It was the perfect set up. It was exactly like stepping into a Rousseau painting. The collection is a nod to the nomadic Berber people of Northern Africa. The designer wanted to express the intimate relationship between the wandering nomad and the landscape. The desert, as they say, is their sky and they can feel its changes. The clothes were imaginative in pattern, as always, and the draping dramatic and fluid, both haphazard and deliberate. There is a kind of wild refinement about this designer that is very pleasing. A beautiful deep v cut caftan appeared in tones of rose and nude with gold spangling trailing in the back. Intricate hand embroidery in magenta, mustard, lime and burgundy created a story for these people through the eyes and imagination of the designer. She was drawing a story with her collection, giving homage to the ancient wanderer but collecting the spirit here, in this majestic hall. — Jeanie Kwak 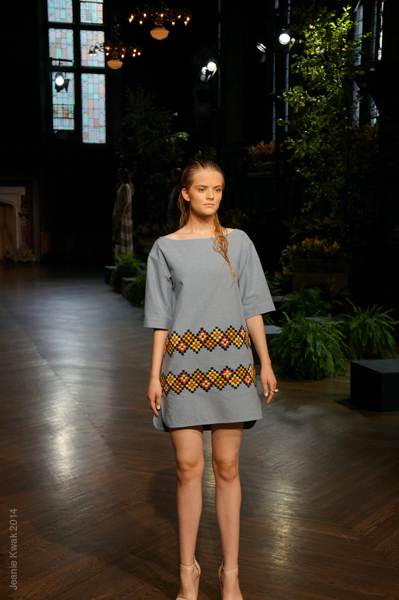 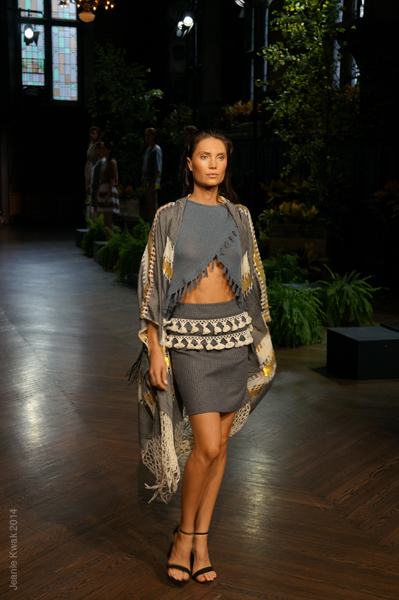 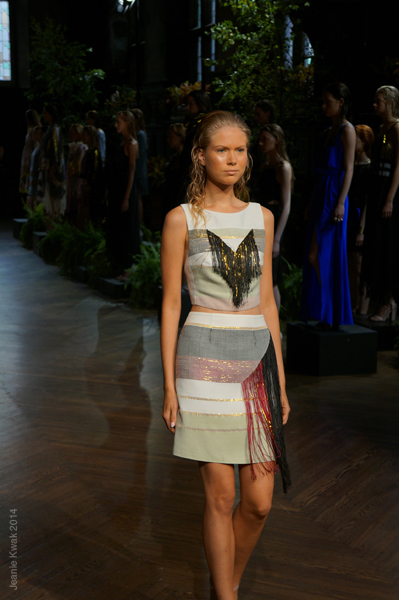 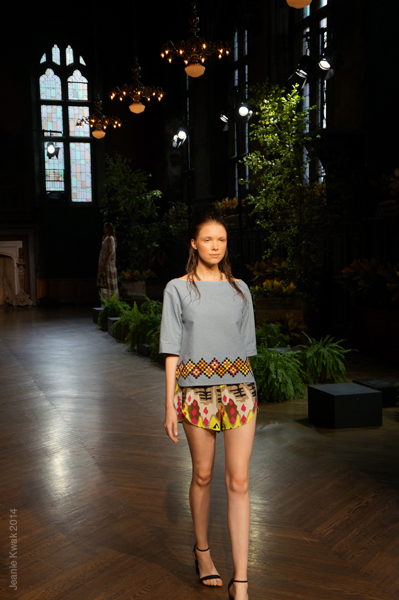 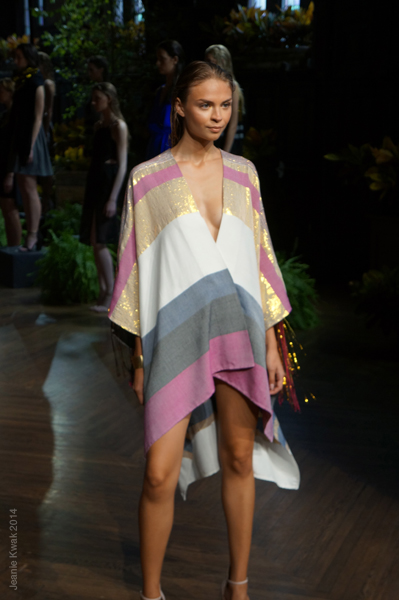 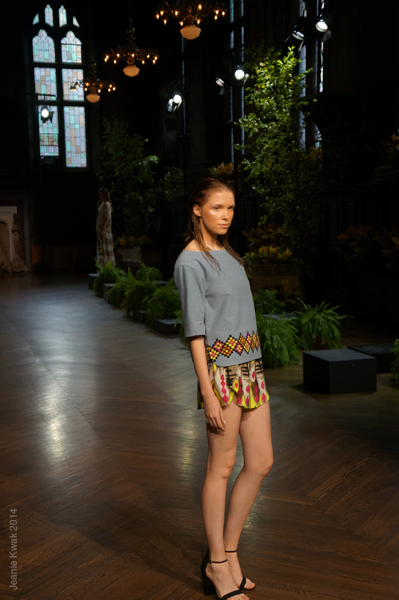 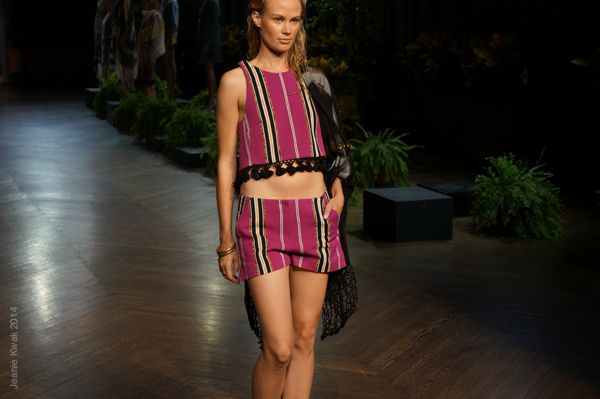 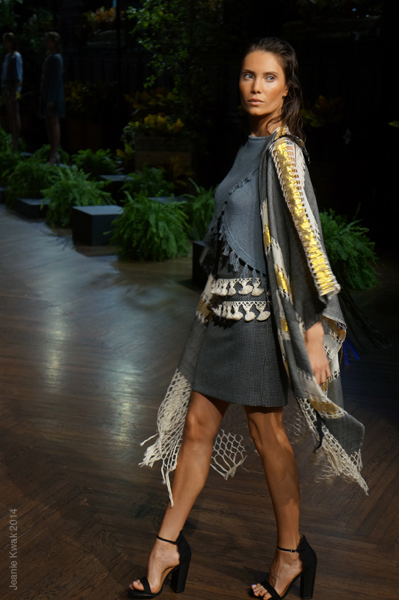 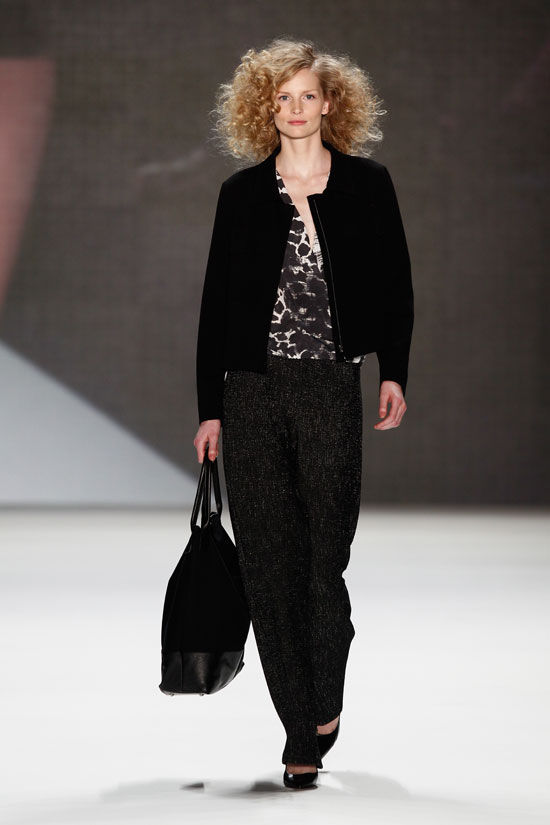 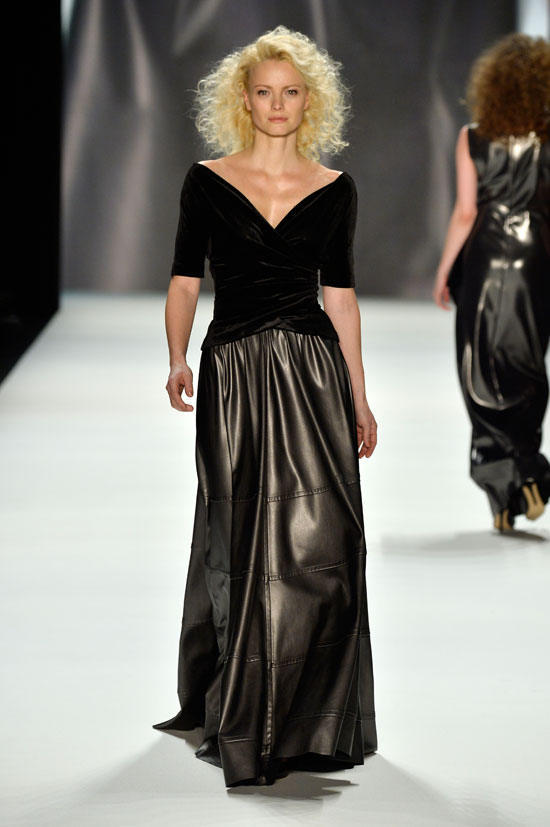 For the sixth time, designer Eva Lutz of the fashion label MINX presented her highlights of the fall/winter collection 2014/15 at the Berlin Fashion Week on Wednesday, January 15th 2014.

As one would expect, the show was booked out to the last seat – like the shows before have been, too. But not only experts, fashion journalists and bloggers have been seen there. With a huge summoning of celebrities, the Minx show was above-standard. About sixty VIPs celebrated crowded together and cheerfully the new creations of the exclusive label: this time it is a fascinating interaction between severe and feminine styles with Britchic and Gentleman influences.

Cool and classy – that is how top models Franziska Knuppe and Luisa Hartema presented the new power-looks on the runway. Together with their colleagues Franzi Müller, Katrin Thormann and Svea Berlie they showed figure-accentuating blazers, voluminous blousons, modern oversize-coats an dresses in numerous varieties.

A big surprise was Bruce Darnell escorting top model Franzi Müller on the runway for the opening of the Red Carpet collection.

The VIPs – from Sonja Kirchberger, Natalia Wörner, Allegra Curtis to Magdalena Brzeska and Jorge Gonzalez – were enthusiastic about the innovative styles and materials.
The one or other piece already developed during the show to a must-have for the upcoming season. 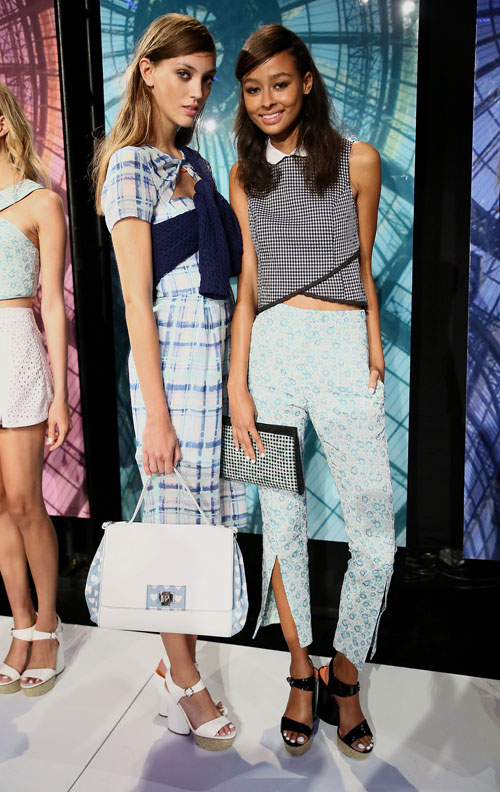 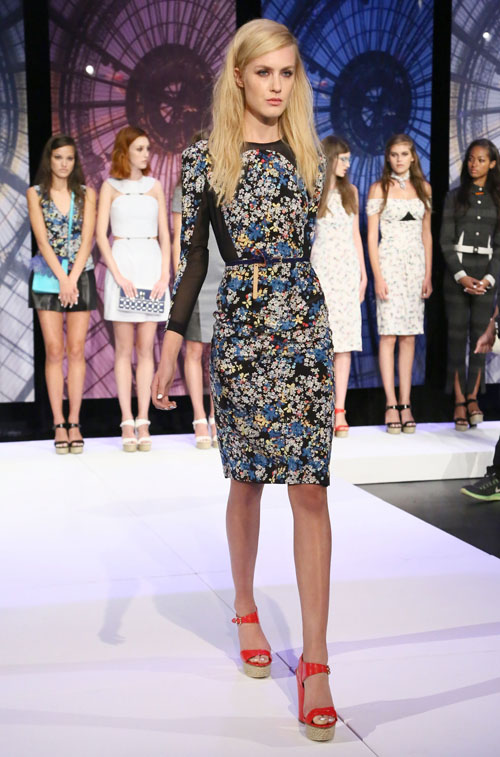 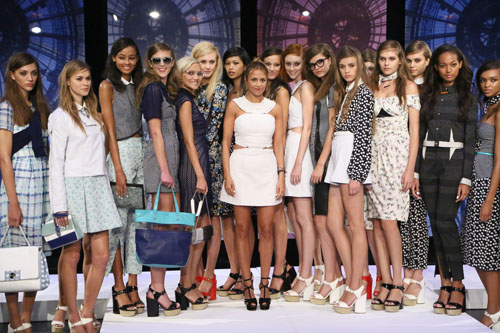 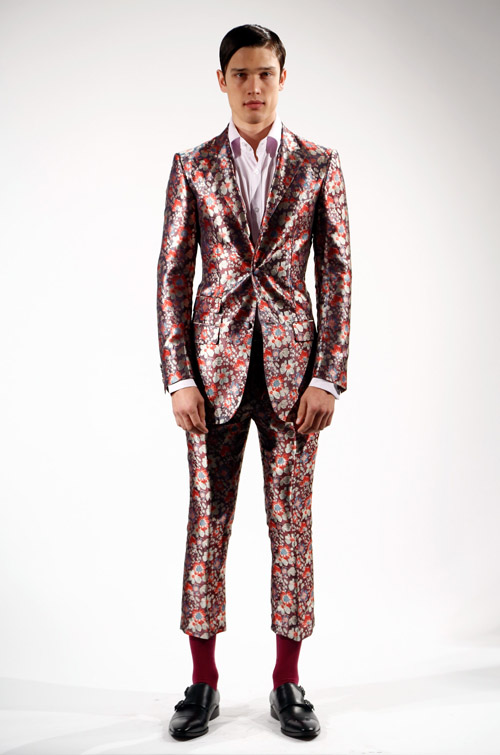 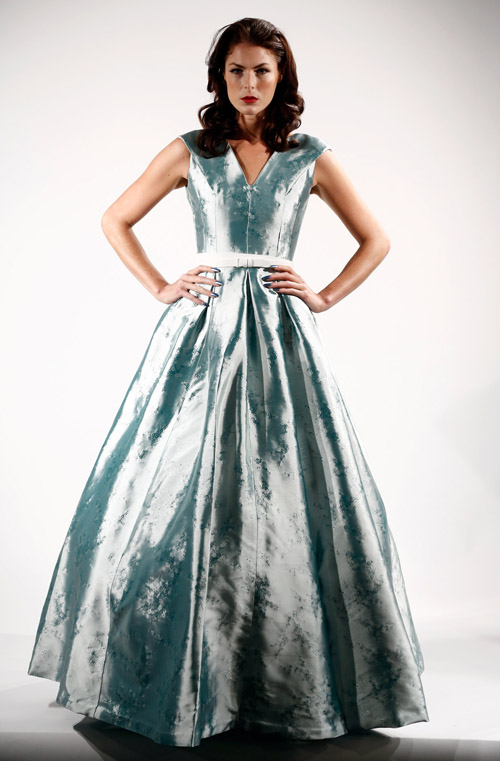 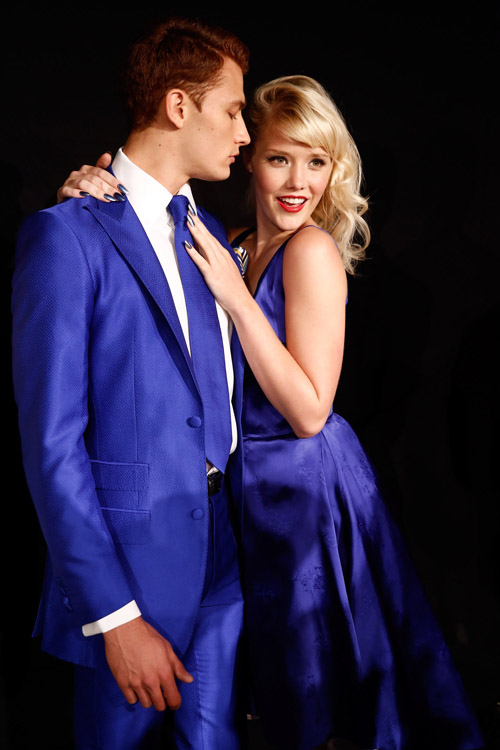 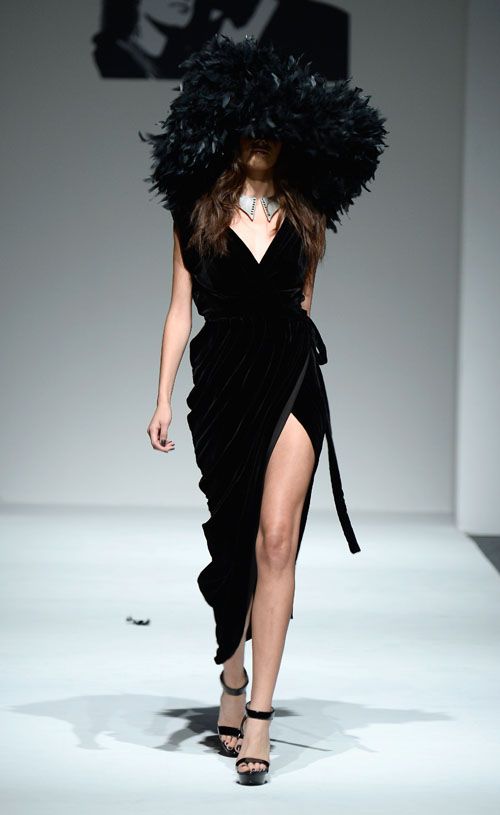 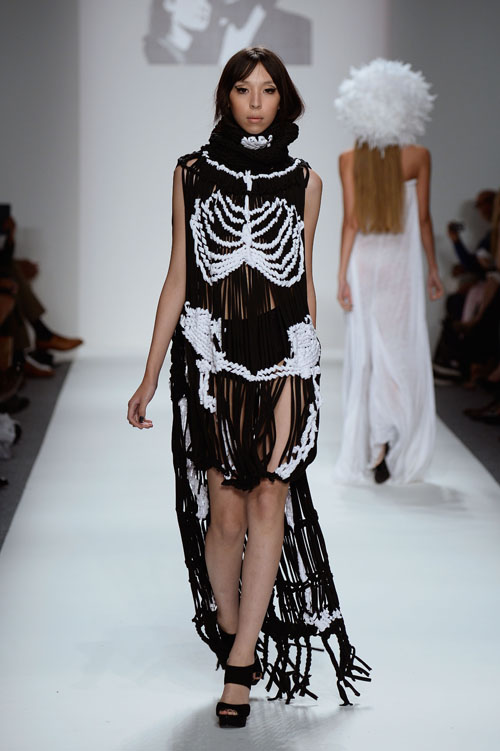 Models walk the runway at the Mark And Estel fashion show during Mercedes-Benz Fashion Week Spring 2014 at The Studio at Lincoln Center on September 6, 2013 in New York City.  (Photo by Frazer Harrison/Getty Images for Mercedes-Benz)